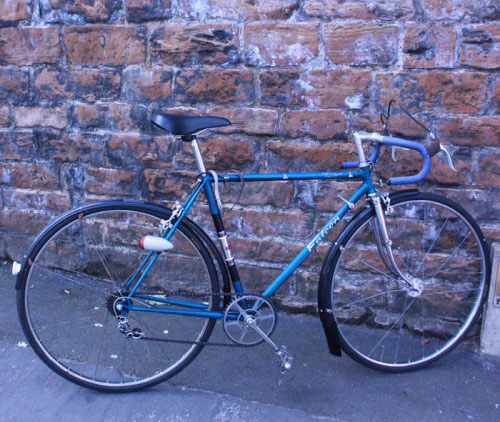 Here at Aladdin’s Bikes we have a stunning, vintage 1963 Falcon bike designed by Mr Clements himself. The frame is the brands signature powder blue and the bike features 27×1 ¼ rims and 531-frame tubing.

Ernie Clements, the three times British National Road Champion, once managed Falcon Bikes. Ernie began making bikes as early as 1945 and he still remains a classic name in the world of British bike frames. It was in the early 1970’s when the brand really took off, as it became the exclusive European and USA supplier of the Eddy Merckx brand. Since, Merckx has been regarded as one of the greatest and most successful riders of all time.

Clements won the British League of Racing Cyclists (BLRC), and the British National Road Race Championship in 1943 and 1945. He came second in the year in between and he also managed to lift the ban of BLRC racers taking part in National Cyclists Union (NCU) races.

Despite his achievements, he never obtained a professional status – not because he didn’t have the chance, but because he declined the proposal. In those days, once a cyclist became professional they were never allowed to return to amateur status. This meant that as they matured, they were not allowed to take part in lower level cycling for enjoyment.

Clement proceeded to open a cycle shop Sri Lanka and went on to manage Falcon in the 1950’s. He retired in Ledbury, Shropshire, where he opened Clements Cycles in 1990. This enabled him to keep in touch with his cycling passion throughout his latter years.

The price of this bike = £299.99
Riding along on a bike designed by a legend = Priceless